The subject of our article today is the well-known Angular Cheilitis. Have you heard? myhealthmyskin will analyze the main causes, symptoms, treatments and how to avoid them. To stay on top of everything, Read this article until the end and don’t miss a thing!

What Is A Angular Cheilitis?

Angular cheilitis is a small painful sore that occurs in the corner of the mouth.

Also known as angular stomatitis and perlèche, it occurs more commonly during the winter and initially the condition is characterized by inflammation.

However, it is common for an infection to later occur with pathogens, such as fungi (such as Candida albicans ) or bacteria, in the places with the greatest accumulation of saliva.

Mouth disease is a common dermatosis characterized by inflammation and fissures at the angle of the lips. If the causes are not tackled, the injury can perpetuate itself, becoming chronic.

Lesions can be unilateral or bilateral. Elderly people are the most affected, but fissures can also occur in young people and children. They are more frequent in children who are prone to atopic dermatitis.

Several situations can lead to the appearance of angular stomatitis, the most common are the use of dental equipments or dentures.

The accumulation of saliva in the corner of the mouth seems to be the main triggering factor facilitating the maceration of the skin formation of fissures and contamination of the wound by bacteria or fungi.

The Angular Cheilitis is a common situation and the main cause is to have the corner of the mouth always wet, as occurs when the baby uses a pacifier, in case of dental prosthesis or braces to correct the position of the teeth.

However, Perlèche can also appear when steroid inhalers are used frequently, when the lips remain dry for a long time, or in cases of dermatitis.

This problem is more frequent when the immune system is compromised, as it occurs in patients with AIDS or diabetes, or even undergoing chemotherapy for example, but in some case, the mouth can be a sign of candidiasis orally, which must be treated.

Situations that favor the accumulation of saliva in the angle of the mouth, trauma or infection of the skin around the mouth are the main risk factors for angular cheilitis.

However, the main risk situations for angular cheilitis are:

READ ALSO  Silicone Prosthesis Before And After: Everything You Need To Know To Achieve The Result Of Your Dreams

Patients with immune system deficiency, whether due to disease or use of immunosuppressive drugs, are also at greater risk of developing angular cheilitis.

Less often, mouth sores can be caused by nutritional deficiencies such as a lack of vitamin B, iron or folic acid, but it can also happen.

And What Symptoms Should I Watch Out For?

Angular cheilitis can present as a fissure, crack, ulceration, redness, or crust at the corner of the mouth. The lesions do not enter the mouth, being limited to the junction of the skin with the mucosa of the lips. 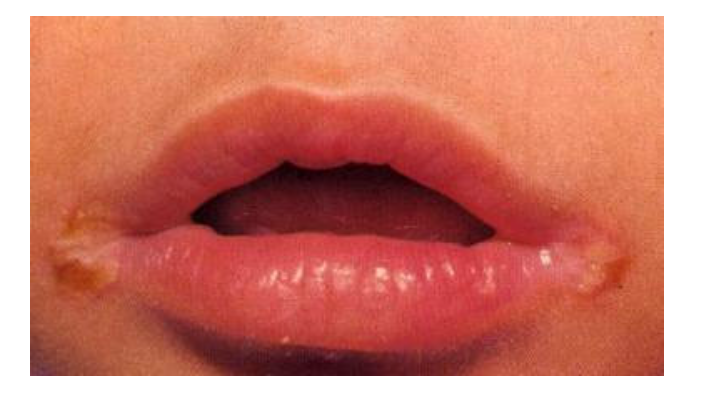 As the skin at the angle of the lips is injured, the simple action of opening the mouth can cause intense pain and burning.

The lesions of angular cheilitis do not usually bleed, but they can become infected, becoming very inflamed and crusting with pus.

Angular cheilitis can become a chronic and persistent lesion or present periods of improvement alternating with worsening and recurrence of lesions.

The main symptoms of cheilitisinclude:

This sore in the corner of the mouth causes a lot of discomfort and sensitivity increases when eating or drinking foods that are very salty, acidic or high in sugar.

How Does The Treatment Of This Condition Work?

The first part of the treatment to cure angular stomatitis is to try to eliminate or correct problems that are causing it to appear. In many cases, simply eliminating risk factors is enough to cure angular cheilitis.

In the elderly, the use of an adequate dental prosthesis may be the only necessary measure.

In many cases, however, we can only cure the mouth with medicine. The use of ointments can solve the problem, but it is first necessary to investigate the presence of bacteria or fungi in the lesions, as the composition of the ointments changes according to the germ to be treated.

READ ALSO  What is Alum Stone? How to Use Alum Stone As an Aftershave

If there is no bacterial or fungal infection, moisturizing and anti-inflammatory ointments such as zinc oxide (found in Hipoglos) or Omcilon Orabase are helpful. Vaseline-based creams are also an option.

If there is a fungal infection, ointments with clotrimazole, nystatin, or miconazole can be used. In some cases, the doctor may recommend the use of fluconazole tablets to help eliminate the fungal lesion.

If there is bacterial infection, ointments such as mupirocin are indicated. Mouthwash treatment with ointments is usually done for 1 to 3 weeks.

So, in short, as we have seen so far, to treat the mouth area and not contaminate other people, it may be necessary to apply a healing ointment such as triamcinolone base or use an antifungal remedy recommended by the doctor or dentist, such as Fluconazole, for about of a week.

Angular cheilitis, also known as angular stomatitis and perlèche, is a sore in the corner of the mouth that can be caused by fungi or bacteria and that develops due to the presence of moisture and can be transmitted by saliva.

In addition, you should avoid eating acidic foods such as vinegar or pepper so as not to irritate the mouth and avoid contact with saliva so as not to contaminate others, and healing usually takes between 1 to 3 weeks.

To help heal the mouth, it is advisable to eat healing foods, such as yogurt or orange juice through a straw, because they facilitate the formation of tissue that helps to close the wounds in the corner of the mouth.

In addition, salty, spicy and acidic foods should be avoided to protect the region and avoid pain and discomfort, such as pepper, coffee, alcohol, vinegar and cheese, for example.

Acidic Foods To Avoid In The Treatment Stage

We know that acidic foods are those that promote an increase in the level of acidity in the blood, making the body work harder to maintain normal blood pH, weakening the immune system and increasing the risk of other diseases.

Some theories, such as the alkaline diet, consider that acidic foods can modify the pH of the blood, making it more acidic.

However, this is not possible, because the acid-base balance that the body has is essential for metabolism, and cell functioning, so the blood pH must be kept in a range between 7.36 and 7.44.

To maintain these values, the body has different mechanisms that help regulate pH and compensate for any variation that may occur.

Acidic foods that can change the pH are:

READ ALSO  How To Lighten Dark Spots On Your Face

If you are treating angular stomatitis, staying away from these foods for the period will be a good alternative at least while the sores have not gone away.

If cheilitis affects the baby, the lips should not be left wet, drying them whenever possible with a cotton cloth and avoiding the use of a pacifier.

In addition, to avoid contaminating the baby, you should not taste the food with the baby’s spoon or pass the pacifier in the mouth, because the baby has a weakened immune system and can be contaminated.

In some cases, it may be necessary to apply the ointment to the baby, but it must be prescribed by the pediatrician.

To treat cheilitis, the doctor may indicate the use of medication, such as triamcinolone ointment, and a small amount of ointment should be applied to the corner of the mouth 2 to 3 times a day after eating, allowing it to absorb.

In addition, the doctor may recommend antifungals such as Fluconazole, Ketoconazole or Miconazole in ointment which should also be applied 3 times a day.

When the cause of Angular Cheilitis is a deficiency of vitamins and minerals, such as zinc or vitamin c, the doctor may recommend vitamin supplements to strengthen the immune system and eliminate perlèche.

It is also important to apply every day and more frequently on hot days moisturizing cream on the lips to keep them hydrated, preventing cracks.

If you want to read more articles similar to angular cheilitis (perlèche) – causes, symptoms, treatments and how to avoid them, we recommend you visit our  Beauty & Skin Care category. Share on your social networks and stay tuned for upcoming articles. 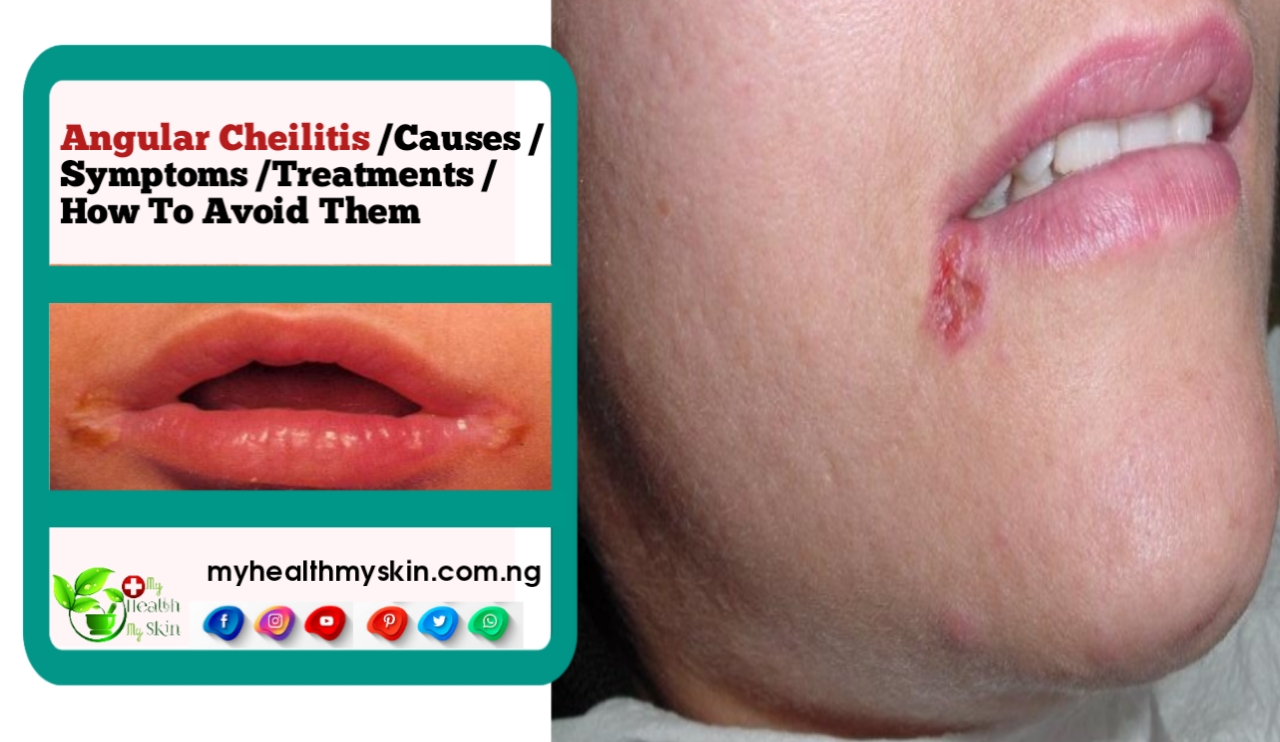 Do You Have Any Important Tips For Angular Cheilitis That We Forgot To Mention In The Article? Comment With Us In The Box Below That We Will Be Happy To Include It In The Article Right Now!

Was this article helpful?
YesNo

feel free to leave a comment below Cancel reply

©2022 Myhealthmyskin. All rights reserved. Our website services, content, and products are for informational purposes only. Myhealthmyskin Media does not provide medical advice, diagnosis, or treatment.

myhealthmyskin
We use cookies on our website to give you the most relevant experience by remembering your preferences and repeat visits. By clicking “Accept”, you consent to the use of ALL the cookies.
Cookie settingsACCEPT
Manage consent

This website uses cookies to improve your experience while you navigate through the website. Out of these, the cookies that are categorized as necessary are stored on your browser as they are essential for the working of basic functionalities of the website. We also use third-party cookies that help us analyze and understand how you use this website. These cookies will be stored in your browser only with your consent. You also have the option to opt-out of these cookies. But opting out of some of these cookies may affect your browsing experience.
Necessary Always Enabled
Necessary cookies are absolutely essential for the website to function properly. These cookies ensure basic functionalities and security features of the website, anonymously.
Functional
Functional cookies help to perform certain functionalities like sharing the content of the website on social media platforms, collect feedbacks, and other third-party features.
Performance
Performance cookies are used to understand and analyze the key performance indexes of the website which helps in delivering a better user experience for the visitors.
Analytics
Analytical cookies are used to understand how visitors interact with the website. These cookies help provide information on metrics the number of visitors, bounce rate, traffic source, etc.
Advertisement
Advertisement cookies are used to provide visitors with relevant ads and marketing campaigns. These cookies track visitors across websites and collect information to provide customized ads.
Others
Other uncategorized cookies are those that are being analyzed and have not been classified into a category as yet.
SAVE & ACCEPT
error: Content is protected !!